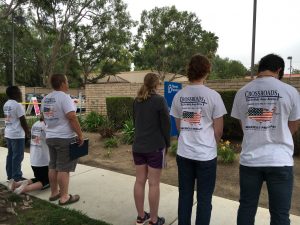 WASHINGTON (CNS) — The path for a group of young adult pro-lifers this summer is about 10,000 miles long.

That’s the collective mileage Crossroads walkers will complete by Aug. 11 or 12, walking from the West Coast to the nation’s capital.

The mission of Crossroads is to “witness to the dignity and sanctity of all human life, especially the unborn. So we like to reach people at a very grass-roots level and meet people where they are,” said walk leader Sydney Donovan, 25, who is from Chattanooga, Tennessee.

Donovan, a two-time walker of Crossroads, spoke to Catholic News Service while leading the southernmost team across the nation.

Now based in Arlington, Virginia, Crossroads was founded in 1995 by Steve Sanborn, then a student at the Franciscan University of Steubenville, Ohio. The now-international organization was launched in response to a call by St. John Paul II during World Youth Day in Denver in 1993 — that youth around the globe take an active role in the pro-life movement “to establish a culture of life.”

Sanborn and other Franciscan University students completed the first Crossroads walk across the U.S. in 1995 in 11 weeks, from San Francisco to Washington for a total of 3,200 miles.

For several years, the organization has sponsored three simultaneous pro-life walks/pilgrimages across the United States; a fourth takes place in Canada.

This year’s three U.S. walks — northern, central and southern — started May 21-22 in Seattle, San Francisco and Los Angeles, respectively. The U.S. walkers will end their sojourn Aug. 11-12 in Washington, with a pro-life rally to take place Aug. 13.

Another walk took place in Australia in January, and a 5th will take place in Spain. 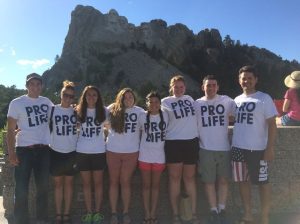 “We give the opportunity for these young adults to really reach out and share the importance, the truth, and dignity of all human life in a unique way,” said David Bathon, Crossroads executive director.

The pro-lifers walk Monday through Friday in a relay fashion — they break into two shifts each day, with a morning and an afternoon shift. They walk sunrise to sunset in pairs of two — these pairs walk for about three miles, then other walkers in a “support van” get out and take the place of those walking — and so forth.

On Saturdays, they pray outside an abortion clinic. On Sundays, they speak at a parish about what they are doing and ask for their prayers and financial support — which is how they raise money along the way. Everything they earn goes towards directly funding their walk. Food, gas, water and other necessities that they have along the way are paid for by the donations.

Walker Lloyd Robbins, 19, from Austin, Texas, told CNS that when the walk was over, one of the things that would stay with him “is definitely the overwhelming positivity and charity of all those we meet.”

The first couple of weeks walker Catherine Lima, 23, from Woodlake, California, would just read the brochure aloud at churches in an effort to raise money to support the walk. Then she started giving her own testimony.

“Before I thought I didn’t have anything to say, but God did. God had something to say through me and that in itself is an experience that I am always going to remember,” she said. “The devil has a tendency to tell us that we can’t do anything because we are too small but the truth is yes, we are small but God is not.”

Walk leader Sydney, said what motivated her was bringing the truth to whomever the walkers come in contact with throughout the summer.