2015 Walks Finish at US Capitol 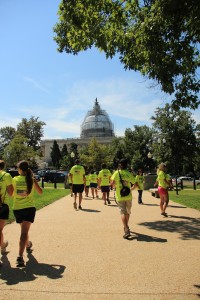 Today, Saturday, August 15, over 40 young people from colleges around the country, converged as their 3, simultaneous, cross-country walks across America, concluded in Washington, D.C. On Crossroads, they experienced firsthand the reality – supported by several recent polls, that a majority of Americans are pro-life. They encountered a warm welcome and outpouring of support as they passed through 36 states, thousands of towns and cities, and walked almost 10,000 miles, collectively, during the 12 week long walks.

To mark the end of their journey, Crossroads held its annual Pro-Life rally at the US Capitol Building. The rally began at 12 noon, in Upper Senate Park, with keynote speaker, Jeanne Mancini, President of the March For Life.

“While the latest polls continue to show that the majority of Americans are pro-life, we have long known that this is a pro-life country because, unlike polls, that take a small sample, we have had the advantage of directly meeting countless thousands of Americans at the grass-roots level. As a country, I believe we are more and more choosing life and rejecting abortion” observed James Nolan, president of Crossroads. “Also, the horror that we have seen in these latest undercover videos from Planned Parenthood is extremely sad, but predictable. The veil has finally been lifted on Planned Parenthood and other similar organizations that make untold millions of dollars off the killing of unborn children and the exploitation of women in difficult circumstances.” continued Nolan. He concluded, “one day soon, we will be able to leave the scourge of abortion behind us and become, once again, a nation that defends each and every human life, from its very beginning in the womb until natural death.”

Since 1995, Crossroads has organized these 12 week long walks across America, from the West Coast to Washington, D.C., to actively take part in rebuilding the Culture of Life in the United States.
During the journey, the volunteers wear t-shirts that say “PRO-LIFE” in bold letters on the front. The volunteers take an active role in the organization’s mission by speaking at churches and to various other groups. They also engage local communities through peaceful, prayerful protests and sidewalk counseling at abortion clinics in the cities they travel through.