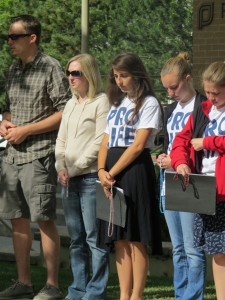 SALT LAKE CITY – On May 24 the 20th annual Crossroads annual pro-life walks started with three different groups of college students from around the United States of America who are participating as a witness to the sanctity of life.

The groups departed from Seattle, San Francisco, and Los Angeles; they will converge Aug. 16 in Washington, D.C. for a pro-life rally at the Capitol. Another group in Canada departed on May 24 from Vancouver, British Columbia and will end at a pro-life rally on Aug. 16 in Ottawa, Ontario.

The Cathedral of the Madeleine welcomed one group of the Crossroads walkers on June 14 at the 8 a.m. Mass.

“We thank you for all the steps you are taking to protect the dignity of life,” said Father Martin Diaz, pastor of the Cathedral of the Madeleine, in welcoming walkers Alex Wilson, Angela Marino, Anthony Briseno, Colby Cantillon, Lauren Mach, Mariana Bianco, Molly Sheahan and Sean MacEgan, who started their journey in San Francisco.

Wilson, who walked the northern route in 2013 and is the walk leader for this year’s Central Walk, said the desert has been more challenging than his previous route. “It has been a little more difficult for me; I am not used to walking through so unpopulated areas. I am used to interacting with a lot of people, getting feedback in the areas on how they stand on the pro-life. … This walk, as far as going to the desert, seems more of a prayer sacrifice; being alone in the desert,” he added. “You can use it as an analogy of being alone in what we are standing for, so it was difficult and hard, but by the grace of God you get through it.”

Wilson has always been pro-life, but walking with Crossroads has been one of the biggest actions he has taken to stand for his beliefs, he said.

“I decided to stop talking the talk and to start walking the walk,” he said. “It is imperative that we put our best foot forward in this fight for life. My desire is to emulate the words of St. Francis, the patron whose name our newest pope has claimed for his own: ‘Preach the Gospel always; when necessary, use words.’ One of our appeals is trying to get more people involved.”

People can be involved in many ways, he said, such as praying each day, putting a bumper sticker on their car, or praying in front of abortion clinics.

While in Salt Lake City, the Crossroads walkers prayed in front of a Planned Parenthood clinic.

Crossroads, which is funded through donations, was founded in 1995 and recently added pro-life walks in Spain, Ireland and Australia. For information, call 1-800-353-8817 or email info@crossroadswalk.org.